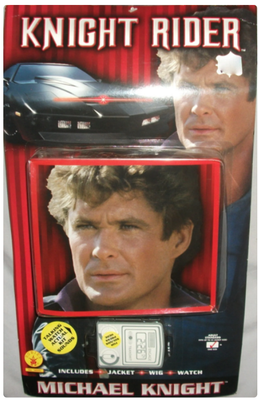 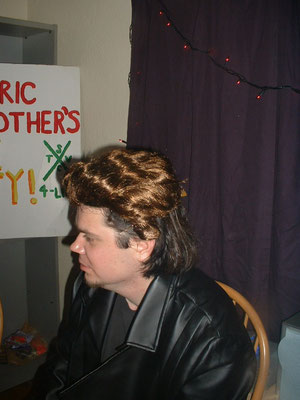 As previously mentioned, we made an impression on Daddy’s Fuzzy Luggage the previous month at Andyman’s, and so they invited us to open for them at this Halloween shindig they were throwing. Club 202 (long gone) wasn’t our usual type of spot, it felt more like a “night club,” the kind of place you see on Knight Rider in the 80’s. Which leads me to my costume; this very Knight Rider costume picture here is something we found last minute at Target. It came with a faux leather jacket that had the words “Knight Rider” printed on it (because Michael Knight was acutely aware that he was in fact, Knight Rider), a plastic watch thing for communicating with KITT, and a wig that was WAY too small for my huge melon. We pinned the short brown wig to my long black hair, and so it looked like I had a poop mullet (photo found, see above).

We set up and waited for a crowd to arrive, and they didn’t. There was one older guy dressed in a yellow Devo hazmat suit with a classic red energy dome watching us and offering friendly heckles, his plain-clothed wife, and I think the guys in Daddy’s Fuzzy Luggage were mulling around at the bar with a couple friends. I strutted proudly around the stage in my poop mullet belting out the hits to a bunch of empty tables. By about the time we were finished, people began to trickle in. We were pretty annoyed, and began to plan our escape. We told the guys in DFL that Mary Alice was sick or something, and we left to go to a friend’s party.

I think that was the last time we saw them, at least as a group, a member or two might have stopped by one of our gigs. By this time we weren’t in the habit of bailing on a show after our set, but there was nobody else we knew there, and DFL seemed like they were in their party mode. They came dressed as a barbershop quartet, and Mary Alice and I share a fond memory of watching each of them hold a shot and harmonizing a four part “Cheeeeeeerrrrrrrs” with each other. As we loaded out, we heard our song being played. We smiled and said to each other: “Daaaaaddy’s Fuzzy Luggage!”