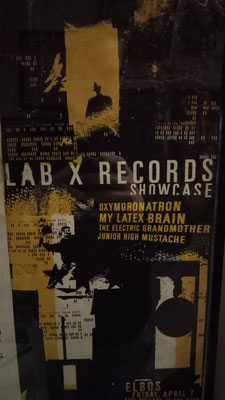 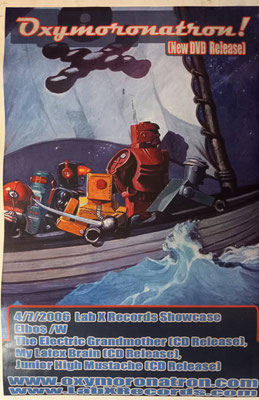 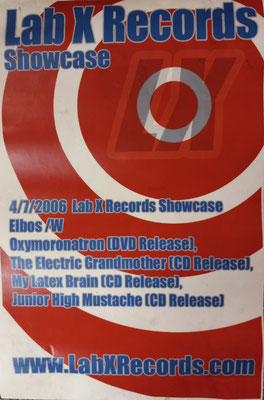 It was on November 12, 2005 where Oxymoronatron member Jason Sanders aka Robot X5 said to me, “Hey, you should join this collective of ours called Lab X Records!” And I agreed. We decided to repackage our “Pee Sells” album for a Lab X CD-R release; to wait to make something new probably would have been smarter, but I was all about things happening as quickly as possible back then. So I went and booked this show myself at the mysterious and apparently now long-forgotten Elbo’s in Dayton. The club had been closed for a short time, but had recently been bought and reopened by new management.

Upon arrival, myself and Greg Schultz of Oxymororantron met with the new owner, a very intense and finely dressed man. While we all were discussing logistics for the evening, the man abruptly interrupted by shouting “We’re going to make some MONEY tonight!,” to which Greg gave a nervous and patronizing, “Yeah!” We then agitated the guy a short time later by bringing in outside food to the venue, but said with a threatening smile that he’d “Let it go” because we were from out of town. When I later asked him out of courtesy about using our bubble machine on stage, I was very timid because I thought this guy might try to cut our throats at any moment. After some thought, he agreed to let us shoot bubbles onto his shiny tiled dance floor.

In keeping with punk tradition, we ended up packaging the Lab X version of our album AT the show while Junior High Mustache, a Columbus band we had recently met (featuring Chris and Kris), rocked out onstage. We then went on and performed for a reasonably sized yet slightly underwhelmed crowd, and massacred the club floor by making it really slippery in there with our bubble juice. I don’t remember much about My Latex Brain except that the guy had a Causey Way sticker on his guitar, which I thought was pretty cool. I don’t remember much about the Oxymoronatron set either, except that they kicked ass in front of their home crowd. This was our last ever show at Elbo’s, as they closed again shortly after, probably because the new owner was a maniac.

I want to thank Greg for providing these three versions of the poster that were made for that night, a Lab X one, a Oxymoronatron one, and the drummer for My Latex Brain made another.

Mary Alice: I have no specific memories of this show, except a very clear memory of the assembly of the compact discs. Germane to this discussion but not specific (though common) to just this memory, when we were packaging our old CDRs, we went as far as applying labels to the disc face to make them look more like “real CDs” which seems like a really low bar now, but felt very professional at the time. Anyway, you could buy fat-doughnut shaped labels you could brand using an ink jet printer. Here’s the thing, though? It’s really hard to ensure a round label is affixed properly to a similarly sized round surface, which is probably something you would never think about until you tried? Anyway, we had a CD label applicator to help and it looked much like this.