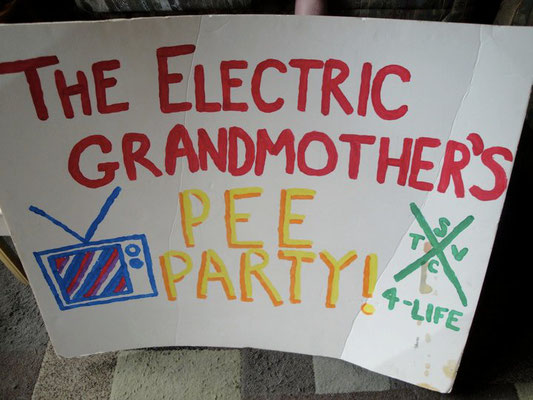 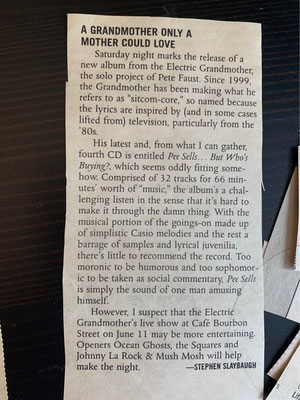 This one feels a little hard to write, as it sort of conjures up some weird and painful feelings for me.  Keep in mind this is just our 19th show, and I still felt pretty green about all of this. I really wanted things to go well for this one, and they just didn’t.  It makes me wonder about bands who have quietly folded when things maybe got too difficult near the beginning. As I’ve mentioned before, I’ve quit EG countless times in my mind, but it’s never lasted more than a few days.  It just always felt like I was on this Black Flag-esque mission, with the intent to have a lot more fun than they did, and also being less sweaty and dirty.  It’s just what I do, and since EG was officially declared a duo in 2009, what we do.

I only recently remembered that I originally wanted to have this show at Andyman’s, because I could already tell we fit in better there. However, the dates I wanted for the gig were already taken, so I decided to reach out to Cafe Bourbon Street. There’s no real reason why I shouldn’t have been able to wait, it’s just always been my way to try and map things out when it comes to EG; “The release date is for this specific time, and that’s that.”  It’s helped keep the band driven, but has at times been a hindrance (more on that much later). I got some dates mixed up when emailing back and forth with the booking agent, and I guess he thought I was being overly apologetic or just annoying, because when I was asking about the date being finalized, he wrote an obnoxious reply of “YES YES YES YES YES YES YES YES YES YES YES YES YES YES YES YES YES YES YES YES (+/- a couple YESES).”

I had been in contact with someone who worked at the Alive magazine about reviewing our new album for this show.  I was working part time at a campus bookstore on the day the new edition came out, and I went and grabbed a copy on my lunch break.  I did that thing where you don’t really read from the top, and you just sort of scan for keywords at first.  Eventually I processed all of it, and then came the weight of sadness.  I knew we were doing something weird that maybe not everyone was into, but this write-up was scornful and accusatory, asking how we had the nerve to even exist in this person’s world.  I went and got a slice of pizza, sat for a while and just thought about things.  I will say that eventually I started chuckling about it, and decided the thing to do would be to own it.  After all, to have such harsh and seemingly personal things said about you in a city-wide paper was kind of funny.  From then on, I made a point to tell anyone who would listen.  Oh yeah, for those in the know, the author of this review is perhaps a bit of an elephant in the room. I’ll just say this about that: At least there’s never been an article written about me in the New York Times meticulously detailing how I’m a complete asshole.

Show night: I had no idea this would be the last time we’d do a show with The Squares.  There are bands who have done shows with us in the past who have used us as stepping stones early on in their beginnings, I sort of hear it as their inner (or maybe even an outer) publicist telling them “Electric Grandmother is fine to gig with at the start, but if you really want to get somewhere with your band, you have to move on.” I’m here to tell you that The Squares weren’t like that. They made a point to say “People have seen us a lot recently, we’ll go on first.”  They played a great set as always, and even did an amazing cover of our song “Tom’s Girl.” Johnny La Rock and Mush Mouth were our buddies and were always great, but considering how relatively new we were, it’d have probably helped to have another local on.  The problem was that I think we only knew so many local bands in those days. Really greenish.  The Ocean Ghosts went on third and completely killed.  They briefly had a 3rd member named Leroy at the time, the same guy who handed me the money and said “I don’t think it’s gonna happen” at the last show we had at Bourbon Street.  The thing is, it was happening to an extent that night.  A decent crowd, and I think we sold around a dozen CDs before we went on. Mary Alice had made a great presentation with the show poster and some pee-colored accoutrement.  Then we went on.

Same old shit with that goddamn CD player.  I was all ready to rock, emerged on the stage from out the bathroom, and the fucking thing started skipping, or getting “shocked,” which I guess is worse, because it caused a greater delay. We were about 10 seconds into “Here Comes the Urkel” when it first happened, and the crowd let out a genuinely disappointed moan of “AWWWWWW.”  The set stunk, though I think we managed to get through all or most of it.

That night, I had a nightmare about a bloody leopard rolling down a mountain into a pile of haunted tarot cards.  I officially declared the era of that tabletop CD player over, and decided that we’d move forward with a laptop computer.  Later on I saw a picture from that night of myself smiling while watching the Ocean Ghosts perform. I remember thinking that I looked very small and lonely, and that I didn’t quite belong there.

Mary Alice: This was such an interesting read because I had no idea you'd maintained these feelings about that show in particular. I guess the bad feelings of the show in retrospect were kind of muted by the colossal weirdness of the review and the eventual, unwilling, close association we would eventually have with its author.

I remember clear as day that we had dinner out at Aladdin's that night and it gave me horrible gas. There's no reason I should have been gassy after eating at Aladdin's but I guess if you remember it as being a crappy show, the shoe fits. I also think after dinner I dropped you at Bourbon Street and went home to get the ancillaries (the poster, pictured, and a small woven basket I want to say I found at a thrift store and filled with yellow paper Easter grass to display the Pee CD in among probably other things).

Looking at the date, it occurs to me that this is the first show we played after moving into that apartment in Grandview, which is probably why I made the second trip home to get balloons and what-not. The summer of 2005 was a fucking weird and unpleasant time for me personally. To be blunt, my mom was dying and I was experiencing some weird health problems as well. I was gaining a lot of weight and not sure what to do with myself career-wise, two years after getting my master's degree and wrapping up coursework in the PhD program, totally aimlessly. God, what a weird time.

Unlike you, aside from the disaster that was our set, I had a pretty good time at the show. The covers by our friend-bands made me feel so--good. I remember both performances like they were yesterday. I'm also 90% sure it was at this show where one of my students came and he'd used Photoshop and a screen print kit to create a homemade EG poster, which also made me feel very warm and happy. I had the feeling that your music actually touched people and think I may have wondered whether we could actually *be* someone if we could just get past this stupid issue with the CD player.

And finally, the poster I made with foam-core and Crayola poster paints kicked around that apartment in Grandview until we moved to DC. I think those stains on it you can see in the pic is actual pee, from when our cat Milo was sick and dying and peeing on everything. Also the SC TV/sitcom core tele vision logo was my play on the HC SE/hardcore straight edge logos which were popularish among kiddie punk scenes in the 90s. I thought it was hilarious but was probably literally the only one.