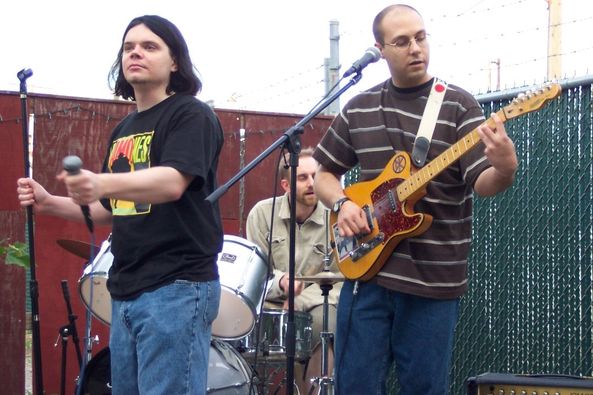 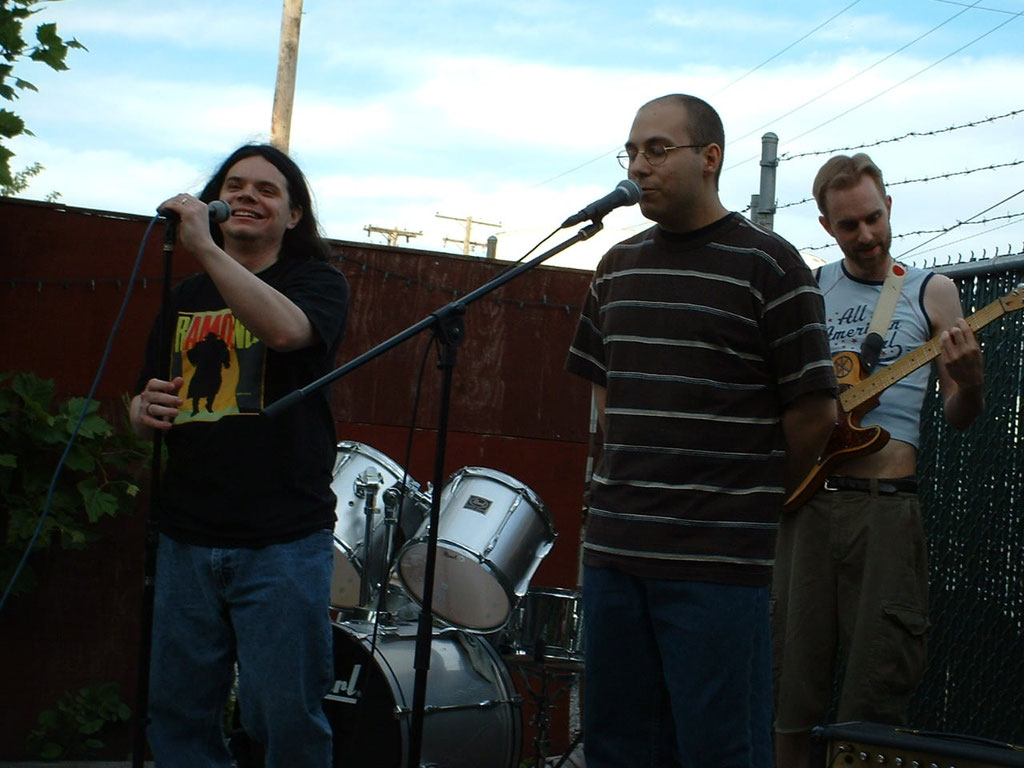 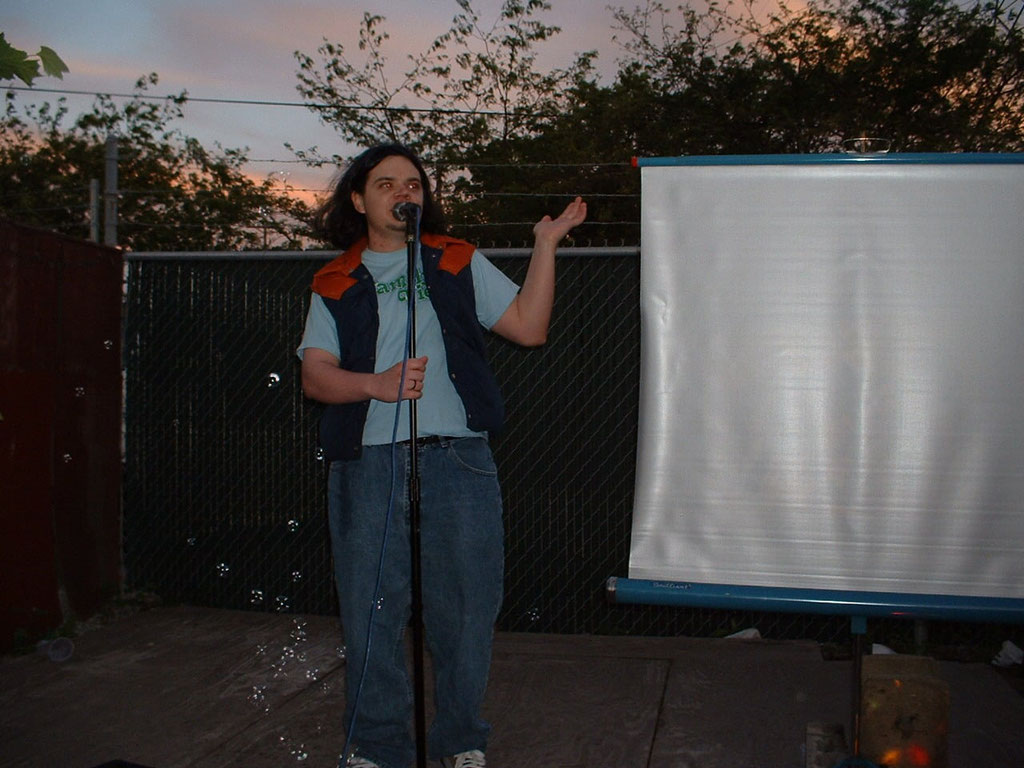 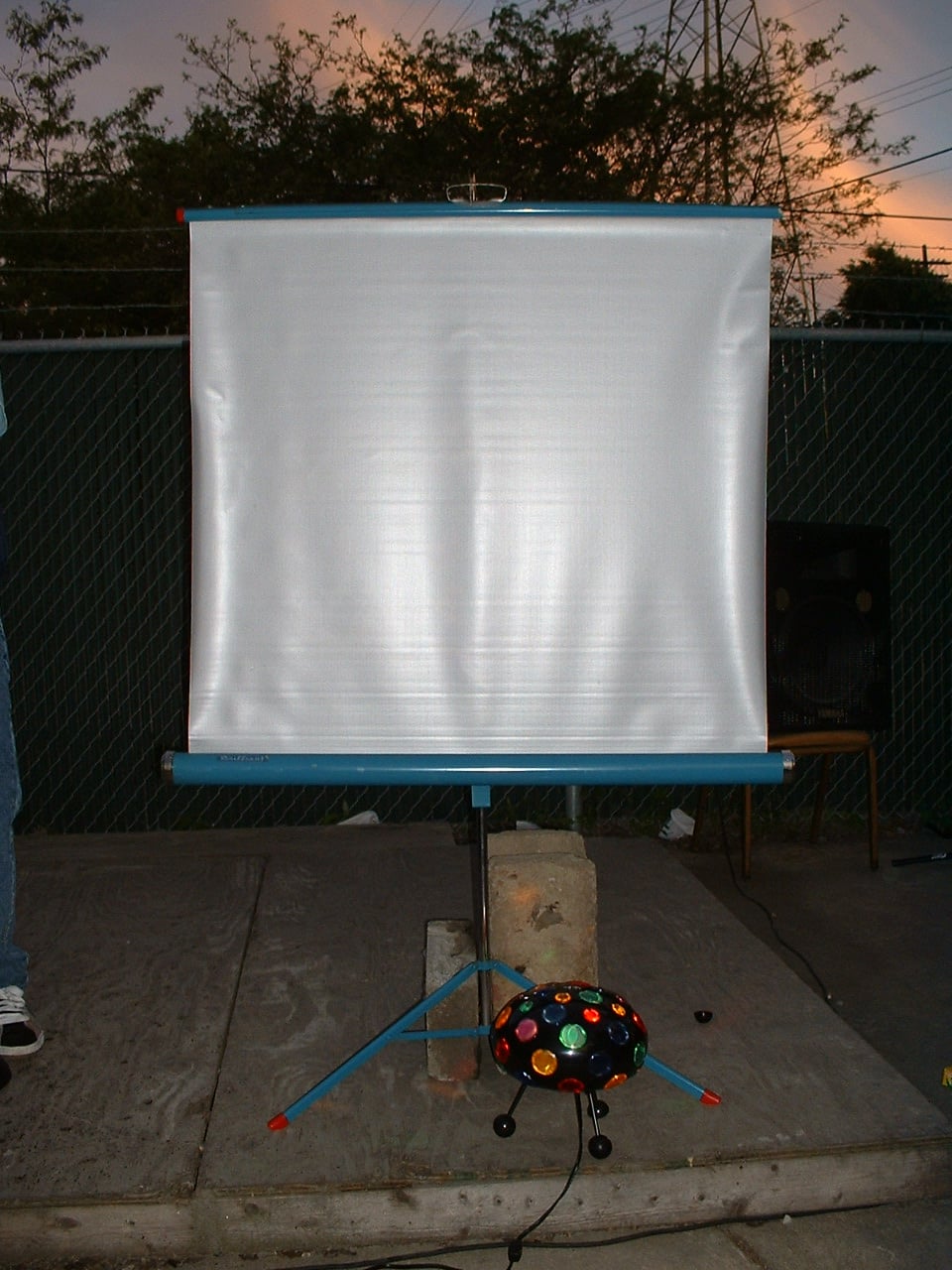 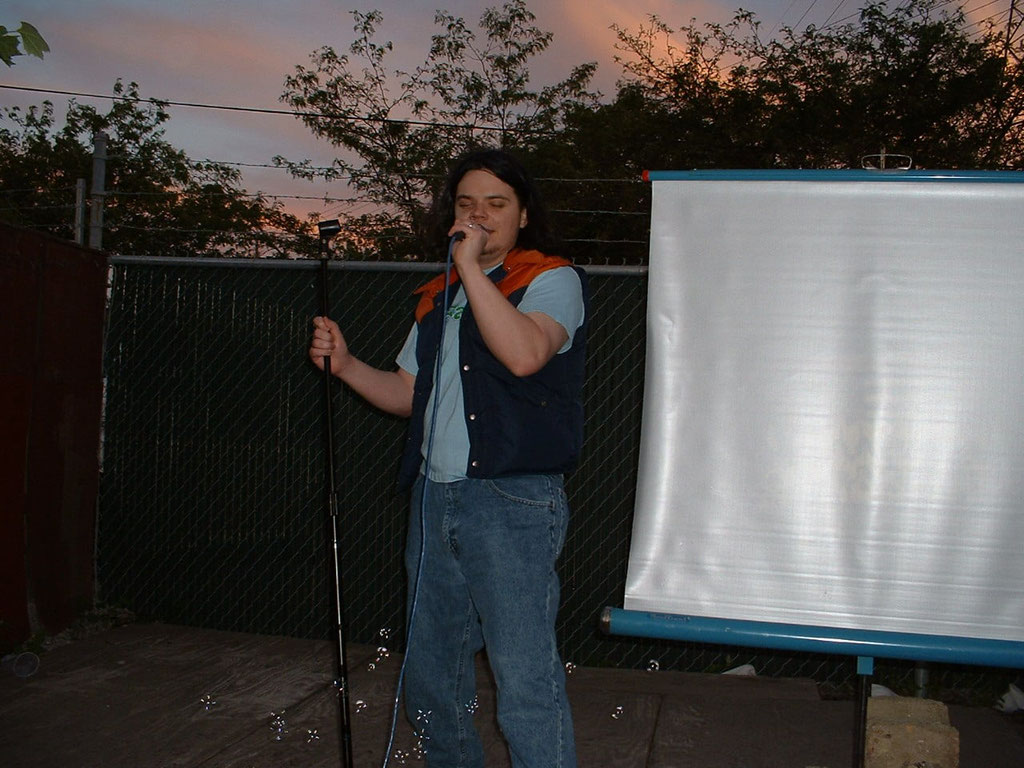 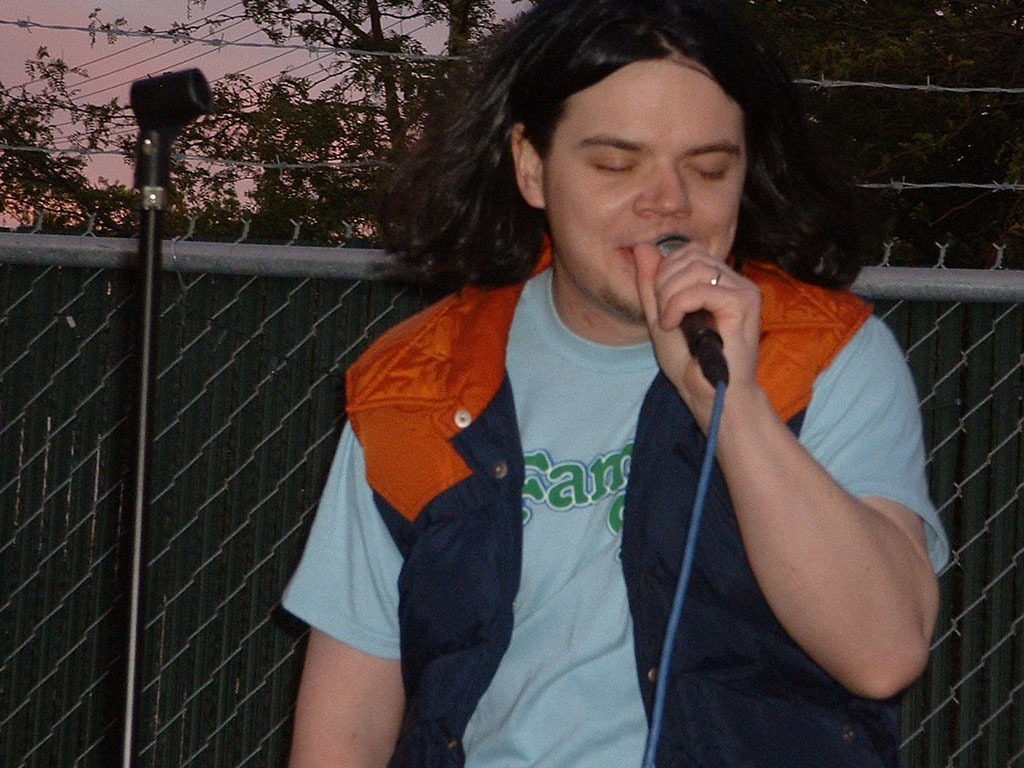 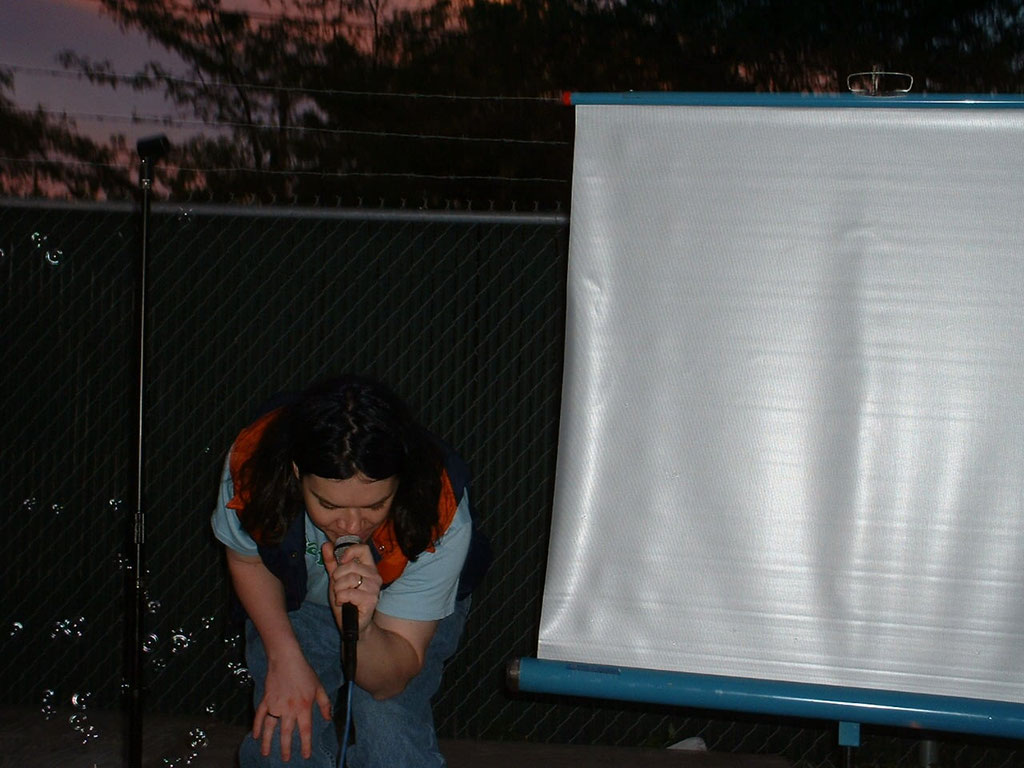 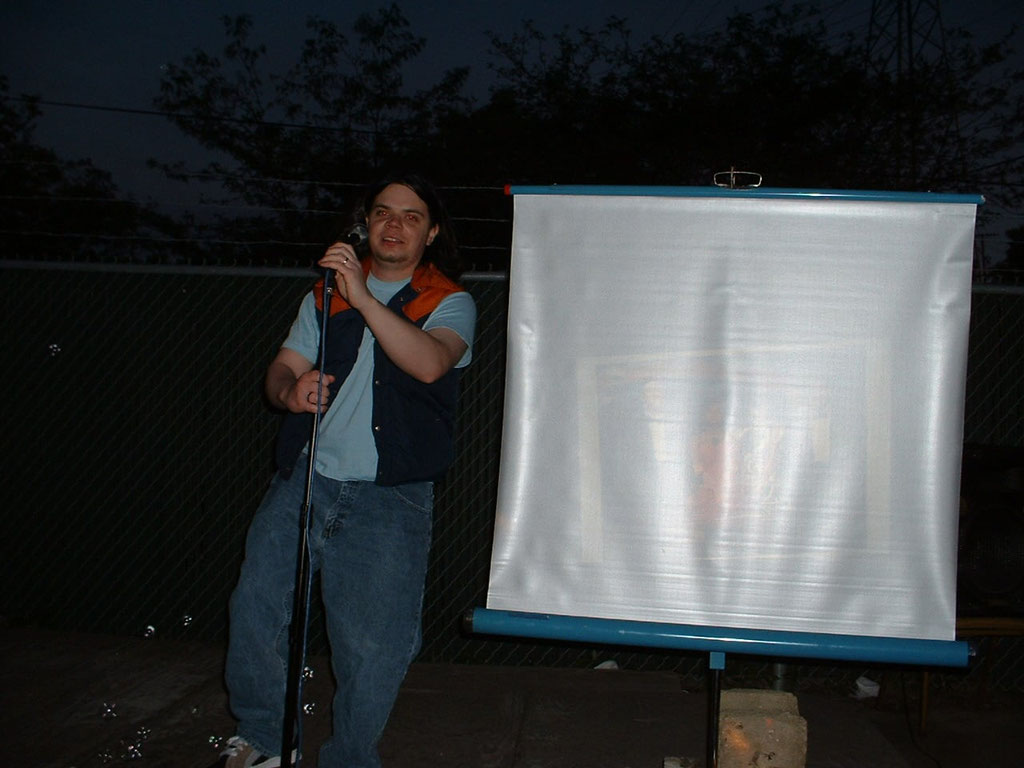 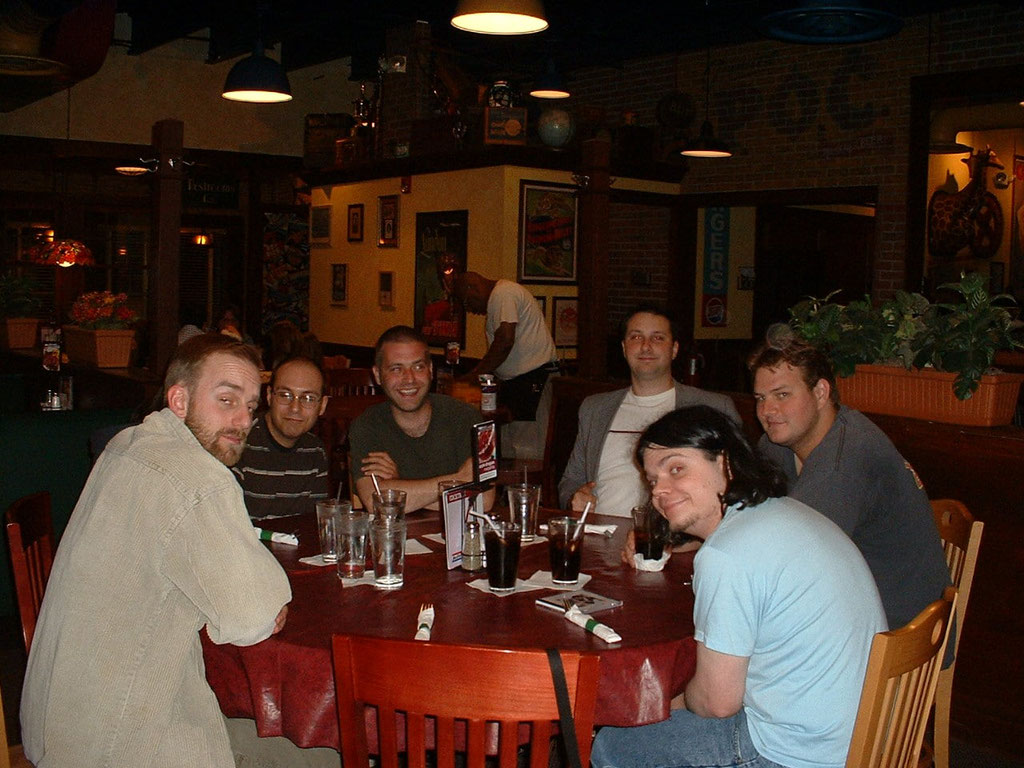 Pat’s in the Flats

My friend Mike had told me on the phone in early 2004 about a “contest” of sorts being run by WCSB Cleveland State radio, where bands would send in recordings on a cassette and the DJs would play the songs on the air. I already had plenty of songs on cassettes, as I had been recording solo as “The Electric Grandmother” since December of 1999. I compiled 5 of my best together on tape, sent it off to the station and promptly forgot about it.

Some time later Mike got back in touch with me and told me that the songs had gotten rave reviews at the station, and the DJs were wanting to find out more about The Electric Grandmother. Mike’s own project called “The Pinheads” had also garnered praise from them, and they wanted both bands to perform on June 19, 2004 at Pat’s in the Flats in Cleveland, and they wanted EG to close out the show. I was stunned, as was Mary Alice, and we quickly hatched a plan. We borrowed the idea of a multimedia show from our friends in the band Infinite number of Sounds - I’d sing over the music on stage while she projected images onto a screen. We bought a tabletop CD player that a DJ would use, and an old slide projector off of Ebay that was previously the property of Georgia State University. Mary Alice gathered images for the projector online, and we contacted someone who could turn the images into slides. We also added other elements to distract the audience, such as a plug in disco light and a bubble machine.

I was actually slated to do double-duty at this show, as I was standing as The Pinheads vocalist for our friend Gary, who was unavailable. Our friend Eric joined on drums, and the makeshift Pinheads practiced for 45 minutes the night before at Mike’s house. Mary Alice and I stayed overnight at Mike’s, and I remember some nervousness being placated by seeing a video performance of David Essex singing “Rock On,” holding just a microphone on a stage surrounded by people while music played in the background. We figured if he could do it (without the addition of visual projection), then so could we.

Pat’s was normally an indoor venue, but “Cassettefest Fest” was set up outdoors. We arrived right at noon while the first band Dolly’s Crotch was playing. I remember the wild-haired guy fronting the band taking off his shirt during the set, and Eric politely applauding in response. I think it was during Black Cabbage’s set where I started to feel the nerves take over. I was sitting at the bar drinking water, and Mike was trying to talk me down some. We heard Dead Peasant Insurance start a noisy-feedbacky set, Mike remarked “Hey, this sounds cool?” almost like a mother would comfort a son, and we went outside to watch. During their set, this motorcycle-looking guy standing in the back loudly stated “You’re beautiful” to the girl in the band, and the crowd fell uncomfortably silent.

It must have been during Thursday Club’s set where I started to feel my stomach hurt from nervousness. I decided I had to do what was necessary to alleviate the pain, but the stall at the Men’s bathroom at Pat’s had no door. If you know me, then you know I went for it anyway. The only person who came into the restroom during this time was Eric, and I sheepishly told him while he looked over and chuckled, “I’m really glad it’s you.”

The Pinheads were on 3rd to last, and I felt ok jumping on the stage with my pals around me. We started with the opening acapella number “Wonder Wayne,” which was a song about Wayne from Wonder Years to the tune of The Beatles “With a Little Help From My Friends.” (It should be noted at this point that ‘Sitcom-Core” was a shared creation, even if I coined the phrase and moved on it the most. It was something that myself, Mike, and our friend Gary did together as a group called The Doldrums). I remember some guy in the crowd smirking and shaking his head when we got the chorus of “I get by with a little help from my brother.” We did about 6 or 7 more songs, including an encore featuring “Mr. Belvedere Loves Ding-Dongs.” It was weird having performed The Pinheads songs first, because Gary had written those lyrics, and I was planning to do more of the same as EG later.

After the band Harvey + Felix played, we were finally up. One of the station DJs looked at the CD player while we were setting up and asked quizzically, “That’s what you’re using?” The wind had started to pick up, and our projector screen kept getting knocked over, jangling our nerves. The Sun hadn’t even really gone down yet and people were standing around waiting, and so we took it as a sign just to give up on the projection. "No," Eric famously said. "That's why we brought it." He then grabbed some cement blocks that were nearby, and positioned them to hold the screen upright. We got in our positions, plugged in the bubble machine, and off we went.

I don’t remember what we started with, or what we finished with. For half of the set the Sun was still shining which made the images harder to see, but after a while darkness fell and the images looked pretty cool. I remember a good deal of hometown friends were there to see the show, and it was oddly cold out that night. The rest was a blur, but we got through it, and couldn’t wait to do it again.

I remember Simpsons Season 4 had just been released on DVD and streaming anything wasn't to the point where we weren't excited about a DVD release yet. I brought it with me. I just checked and sure enough. June 15, 2004.

I remember Matt Mansbach had this drawing he did of 80s Tom Hanks. I think it was a birthday card for someone? It was SO GOOD.

HARVEY + FELIX!!! I think that was the first of many, many bands where I saw them and thought "wow we're going to be best friends with these people" and I never saw or heard from them again.

I'm pretty sure we closed with "Dance Party."